As unexpected and meaningful as Mississippi itself, this unique custom guitar made it's way to Wendy in 2022. 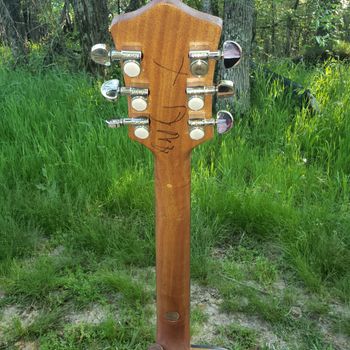 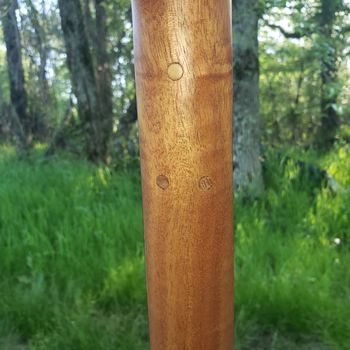 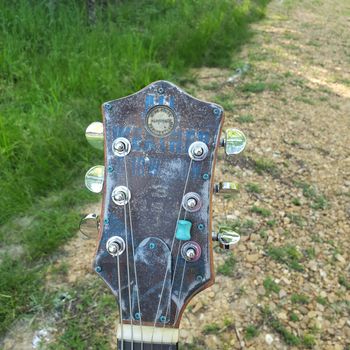 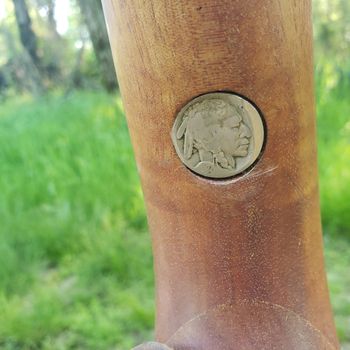 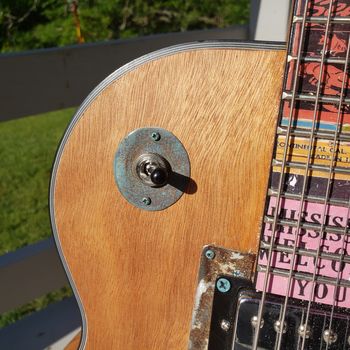 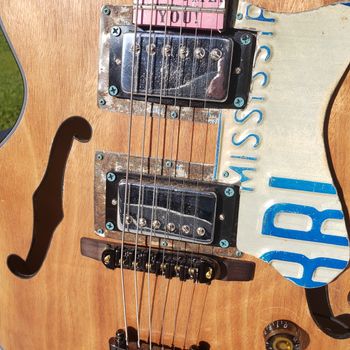 For a complete rundown of how the guitar was made, and it's special meaning see:  https://youtube.com/playlist?list=PLwpC_9xg-cAIkYVEEejarNwUJARavyEid

Here are some features:

1.  The signature on back of headstock:  Tamara ‘Tami’ Pfalzgraf, Ken's daughter, signs all of Ken’s creations.  Her signature is meant to increase awareness for Cornelia De Lange Syndrome.  Many who are diagnosed with CdLS are non-verbal.   https://www.cdlsusa.org/what-is-cdls/

3.  Bead to high B string:  represents Eli Green a Como Mississippi blues musician, born in the early years of the twentieth century.  A proported hoodoo man, Green’s musical styles were influenced by Charlie Patton and Son House and were influential on Fred McDowell and Junior Kimbrough.  Little is known about this mystery man of the blues:  https://www.mtzionmemorialfund.org/2018/06/eli-green-is-dead.html&nbsp;

4.  Neck:  matchbooks from places in Mississippi

6.  Buffalo nickel from 1927:  the year of the legendary Mississippi River flood.

7.  Pick guard:  from a Coahoma County Mississippi License plate.  Considered by many to be birthplace of the blues

8. Scrap metal used as matching functional highlights throughout the guitar.  On the headstock, surrounding the pick-ups and pick-up switch

9.  Relic wood triangle on back of neck:

A.  Top of triangle:  Collected from the grounds of former Paramount Record (Wisconsin Chair Company) site in Grafton Wisconsin where Son House was recorded on his trip with Charlie Patton in 1930.

B. Lower left of triangle:  Scrap wood from the grounds of the church of Reverend Rube Lacey in Ridgecrest California.  In his early days as a preacher, Son House would call attention to blues music being of the devil, specifically pointing out the guitar playing style of Rube Lacey.

C.  Lower right of triangle: from Topanga Canyon California where the distinctive Canned Heat singer Alan Wilson died in 1970.  Wilson was instrumental in re-teaching Son House his own music during the early 1960’s blues revival.  Wilson would later record with the Reverend Ruben Lacey at his church in Ridgecrest in 1967.